Summer is upon us! Yeah! But along with summer comes the blistering sun…especially here in Nevada. And, while my shoulders and legs can handle any old sunscreen I happen to throw on, my face is an entirely different story. I hate putting sunscreen on my face. Here I am on the battlegrounds of aging skin and I hate using sunscreen on my face (which every dermatologist and my mom keep telling me I really ought to use religiously to fight off the signs of aging. Sigh. I love the sun and love being tan so it’s hard to refrain from luxuriating by the pool for hours on end in the quest for a golden glow. But, I really don’t want to look like a wrinkled prune in the near future so sunscreen I must!).

Why do I hate sunscreen on my face? Because it burns and it makes me break out. Yes. I’m in my 40’s and still break out (like some 13 year old) when I apply sunscreen to avoid looking like a gnarled hag. Oh, the irony of it all! So I have actively avoided using anything on my face to protect it from the sun. Not a horrible decision for the last many years since we’ve lived in the mid-West and rarely see the sun. However, now that sunny Vegas is our home, I need to approach things a little differently. My mom gave me a tube of Obagi Nu-Derm SPF 50 Sunscreen two years ago and I finally pulled it out and gave it a try. Where has this been? Finally, a sunscreen that doesn’t sting when I put it on my face. Finally, a sunscreen that doesn’t burn my eyes when I start to sweat in the sun or while working out. YES!!!!!! This is it. I can finally wear sunscreen on my face. My future is looking brighter…and less wrinkled! 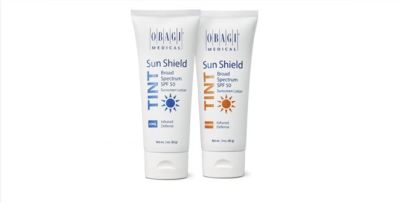 Courtney’s rating on Obagi Nu-Derm Sunscreen: Can’t live without it!

I can definitely say I have a love/hate relationship with sunscreen. On one hand, I love the smell of sunscreen, it’s just so refreshingly…summery. But on the other hand, it reminds me of all those times my mom held me back as a kid from jumping into the pool while she forcibly lathered on layers of sunscreen. Let’s face it, no amount of good smells can make the process of trying to carefully cover every conceivable part of your body seem worth it. And maybe it’s just me, but I always seem to miss an area – the tops of my ears, my back, the tops of my feet – some ridiculously small area that turns neon red for all to see and frequently comment on and laugh at for the next day or two. It’s a rough life 😉 However, one product that I stumbled upon by accident has actually made my summers a lot smoother and more pain-free: Ultra Sheer Sunscreen by Neutrogena. It’s sped up the application process while still keeping me perfectly covered and now there’s always at least 2 bottles of it in my beach bag!

What Kylee hates about the Ultra Sheer Sunscreen: