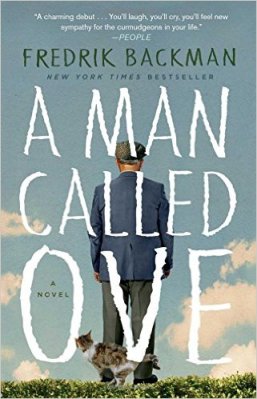 I was a little more skeptical starting A Man Called Ove. I know the movie version had been nominated for an Oscar or two, but it seemed a little too touchy feely for my personal taste. Starting the book, it definitely took me four or five chapters to really get into it. At first it was a little slow but once the plot became more clear, then I really got involved in the story. There is definitely no real surprises with this story. As a reader or movie watcher I guarantee you’ll be able to guess the plot within the first few chapters. So from that perspective, the story is nothing spectacular, however it is a lovely book. I still enjoyed reading it and it no longer felt like a chore to finish the story. I also particularly love the author’s writing style. It’s clever and witty and made me smile more than a few times. A great feel good, character changing book that’s also pretty short. This book would make a good beach read or pick-me-up.

I picked this month’s read based on the great ratings I saw on Amazon. A Man Called Ove reminded me of Cold Sassy Tree which was popular years ago. Like Cold Sassy Tree, A Man Called Ove took me a bit to get into. But once I was in…I was in. The author does a fantastic job revealing the main character slowly, patiently weaving stories from the past into the present. And, the author’s sense of humor had me smiling to myself on multiple occasions. Being a bit of a romantic, the development of Ove and Sonja’s relationship and love story kept me engaged. A Man Called Ove would make a great book club read. I noticed lots of good discussion points as I was reading. In my opinion, A Man Called Ove is well worth reading.