I’ve worked for several years in a health club. As staff, we swap healthy recipes that really work. One of the best we passed around the office is for quinoa coconut granola bars as found on www.superhealthykids.com. This recipe is awesome. The first time I made it, I wasn’t horribly impressed. But, I tried again…made a few tweaks and now I’m a huge fan. My particular favorite is to use it as granola with a little almond milk on top. Amazing! Quinoa is the base for this wholesome breakfast/snack. Quinoa is an insanely healthy grain…high in protein and gluten free. Gotta love it! The amazing thing about this recipe is you can change it up by swapping out any dried fruit for the dried cranberries. Also, I enjoy this recipe best without the cup of oats. I simply leave it out. Lastly, I swap the pecans out for toasted almonds. This quinoa granola really satisfies my sweet tooth while providing a dose of whole grains and protein. 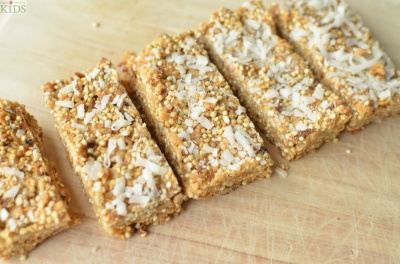 Confession corner: quinoa scares me. As someone who, embarrasing to admit but I will, struggles making rice sometimes, quinoa has always appeared to be another grain that would allude my grasp. So I approached this week’s recipe Courtney sent me with a little trepidation. However, I will admit for the most part that I was pleasantly surprised. It wasn’t the ultimate kitchen disaster I was dreading. However, even though I love coconut, I liked it…but it wasn’t my personal cup of tea – at least as bars. But as Courtney said above, I bet with a few personal tweaks and adjustments, I could get a flavor I love without sacrificing all the healthy qualities.

Kylee’s rating on Quinoa Coconut Granola Bars: Meh 😐
Scale: Never again, Not worth it, Meh, Like it, Love it, Can’t Live Without It